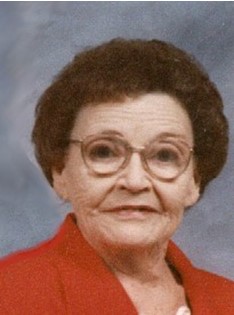 Guestbook 5
Funeral services for Annabett J. Harry of Riverton will be at 2 p.m. Friday, Jan. 4, at the Davis Funeral Home of Riverton. A viewing will precede at 1 p.m. The Rev. Dale Adams will officiate. The Order of the Eastern Star will conduct a memorial service.

Burial will follow at Mountain View Cemetery in Riverton.

Annabett J. Whitten was born in Loco, Okla., on Oct. 29, 1923, the daughter of James R. and Bertha (Tucker) Whitten. She was graduated from Loco High School in 1940. While attending public school, she received numerous awards for perfect attendance, spelling, and was a member of the junior/senior play cast and Glee Club.

Mrs. Harry was a mother and homemaker. She retired from Fremont School District 25 as a cook at Ashgrove Elementary School in Riverton. During her time at Ashgrove, she and the other cooks entertained many children with their costumes for the various holidays.

She was preceded in death by her parents, James and Bertha Whitten, and granddaughter, Shannon Harry.