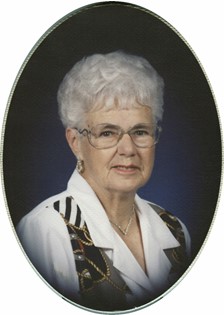 Guestbook 8
Doris E. David of Riverton died on Thursday, Jan. 3, 2008, at Wind River Healthcare in Riverton, with her family by her side. She was 92 years old. Funeral services will be held at 10 a.m. Tuesday, Jan. 8, at the United Methodist Church of Riverton. There will be a viewing from 7 to 8:30 p.m. Monday, Jan. 7, at the Davis Funeral Home of Riverton. Doris E. Brown was born on May 26, 1915, in Milford, Neb., the daughter of Bertie and Pearle Brown. She married Verle David on Oct. 29, 1934, in Bassett, Neb. They farmed in Nebraska until moving to Riverton in 1956. Her family said Mrs. David enjoyed family activities, bowling, camping, and supporting her children and grandchildren in sports activities. They said she enjoyed walking with her friends and was very active within the United Methodist Church. Mrs. David was a member of the United Methodist Church of Riverton, Joanna Circle, a Past Noble Grand of the Grand Order of Rebekah's, and the Good Sam's Club. She worked out of the home for many years and retired from C.R. Anthony's Clothing Store in 1985. Mrs. David is survived by children, Larry and wife Kathy, Vernon and wife Brenda, Darla Paskett and husband Lynn, all of Riverton, Lyle and wife Colleen of Pavillion, Sandra, Ronnie, Terry and wife Liza of Riverton, Dale and wife Teresa of Lander, and Kathy Schilling and husband Willie of Riverton; 23 grandchildren, 30 great grandchildren, and one great-great grandson; brothers-in-law, Earl David and Zane Rowse of Chambers, Neb., Lyle David of Burwell, Neb.; a sister-in-law, Doris David of Ord, Neb.; numerous nieces and nephews, a host of good friends, and special friend, DeEtta Kintzler. She was preceded in death by her parents; husband, Verle; daughters, Shirley and Ruby; five brothers, four sisters, daughter-in-law Jamie David, and great grandson, Aaron Cragoe. Memorials may be made to the United Methodist Church of Riverton or to a charity of the donor's choice. On-line obituaries are available and condolences for the family may be made at: thedavisfuneralhome.com Services are under the direction of the Davis Funeral Home of Riverton.