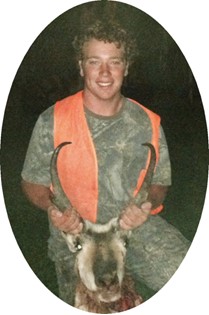 A viewing for Nathan will be held 5:00 p.m. – 7:00 p.m., Sunday, January 26, 2014 at the Davis Funeral Home. Funeral services will be, 10:00 a.m., Monday, January 27 at the Fremont Center at the Fairgrounds. Everyone is invited to join the family for a reception at the Fremont Center immediately following the service. After the reception the family invites everyone to join them at the Roy Peck Riverton Raiders American Legion Field behind the college for a baseball game in Nathan’s memory. Please bring a baseball mitt to play or blankets to watch those who are playing.

Memorials may be made to the Riverton High School Band Program or the Riverton Raiders American Legion Baseball Program in care of the Davis Funeral Home, 2203 W. Main Street, Riverton, Wyoming 82501. An account has also been set up at Central Bank and Trust to reach out to help the family through this difficult time.

Nathan was born November 9, 1995 in Jackson, Wyoming. Nathan, a senior at Riverton High School, was involved in many sports and activities. He played football, tennis, and wrestled. But what he truly loved and where he shined the most were on the baseball field, whenever he had a tuba in his hands and on the recital stage. Nathan picked up a tuba for the first time in 6th grade, his band instructor Jason Bennett told everyone he was born to play the tuba. His love of music grew from there. He began dancing in 7th grade because he wanted to learn how to tap, however he soon discovered that modern dance was his passion. You couldn’t watch him dance without feeling what he felt and seeing what he saw.

Nathan had a contagious smile and a laugh as if it originated from his toes. He was a friend to anyone in need, had a gift of putting those around him first and making their burdens his own. It was commonplace for coaches to declare Nate “the most coachable kid they could ever have” and compliment his hard work on the football field, baseball field, and wrestling mat. Besides being a friend to anyone in need, Nathan was a fierce and devout teammate, someone you always wanted on your team. His aspiration for the future was to become a music therapist.

In his very, very, short life Nathan touched many people. Through this irreversible tragedy and in his eternal absence let his living example stand that we may all be a bit kinder and gentler… that we all aspire to be better friends, family and community members. Please, please know that a permanent solution to a short term problem is absolute and the ramifications are vast. Nate will constantly be missed and a hollow hole forever etched in our hearts. The world has lost a truly amazing young man and will be the poorer for it.

He was preceded in death by his grandmothers Margaret Millgate Dalley and Donna Robertson Hatfield, his grandfathers Leon Adus Dalley and Silas Dean Hatfield, and uncles James Lee Dalley and Ashley Hatfield.