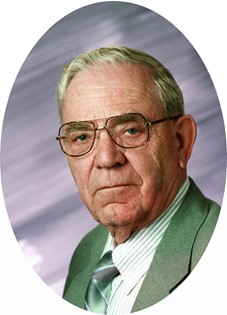 Guestbook 16
Funeral services for area businessman, Wayne Major, 94, who passed away peacefully February 14, 2014 at Help for Health Hospice Home, will be held 11:00 a.m., Thursday, February 20th, at the Fremont Center, the former Armory, 1010 Fairgrounds Road, Riverton, WY. Interment will follow at Mountain View Cemetery. A visitation will be held at the Fremont Center Thursday, 9:30 a.m. until service time. Memorial to Help for Health Hospice Home in his name would be gratefully appreciated.

Wayne was born June 29, 1919 in Elwood, Nebraska, the son of Hallie (Franey) Major and Leslie Major. He chose to serve the Lord at an early age which choice he has honored all his life.

At age 19, he and his brother, Harold, moved to Wyoming to work construction and stayed because of the opening up of irrigation. He married Rama Davis in 1943. After farming for many years he started Major’s Equipment and began selling farm supplies and then fertilizer to area farmers. In 1969 he became the Fremont County Butler Building representative and built many farm and commercial buildings in the community over the next fifty years.

He was noted for his friendly, cheerful manner and interest in everyone he met, developing numerous valued friendships throughout his long lifetime.

He is survived by his wife of 70 years, his 98 year old brother, Harold of Safford, Arizona; sons, Wayne, Jr. and wife, Wanda of Riverton, Leon and wife, Ava of Vale, Oregon, his four grandchildren, Shawna Major of Bridger, MT and Brent Major of Laramie, WY, David Major of Safford, AZ and Heidi Major of Vale, Oregon plus many beloved nieces and nephews from both sides of the family.

He was preceded in death by his parents and a granddaughter, Michelle Snelling.

On-line condolences for the family may be made to theDavisFuneralHome.com Services are under the direction of Davis Funeral Home.