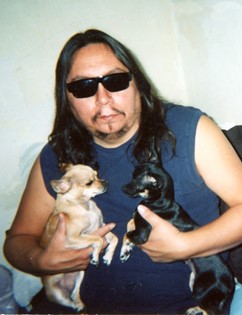 Michael Lee Duran was born on April 21, 1963 in Helena, MT to Joyce Marie Duran. He was a life long resident of the Wind River Indian Reservation. He attended school in IL to become a meat cutter “butcher”.

He was of the Catholic faith and also was a member of the Native American Church.

He worked at Tribal Elections as security personnel, doing roofing, at was a stocker at Wal-Mart and was a meat cutter at the Wind River Casino.

His family said he enjoyed drawing, listening to music, taking in and raising dogs, being an avid boxing fan, meat cutting, and watching nature shows, Seinfield, Conan the Barbarian, and COPS. He loved being with his family and friends.

He was preceded in death by his mother, Joyce Marie Duran; his brother, Roderick Louis Underwood; his grandparents, Steven Sr. and Ida (Willow) Duran, numerous aunts, uncles, and cousins.