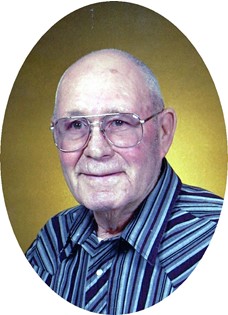 Guestbook 5
Scott A. Kisling, 86, of Riverton, died on Wednesday, April 02, 2014 at the Wyoming Retirement Center in Basin, WY. A viewing will be held on Monday, April 7, 2014, at Davis Funeral Home from 6:00 pm to 7:00 pm. Funeral services will be on Tuesday, April 8, 2014, at 3:00 pm at Trinity Lutheran Church, with Reverend Vernon Boehlke officiating. Burial will follow at Mountain View Cemetery.

Scott Allen Kisling was born on September 2, 1927 in Morrill, NE to Jonathan S. and Gladys (Bayne) Kisling. He graduated from Pavillion High School in 1945. In August after graduation, he joined the U.S. Navy and served during WWII, he was honorably discharged.

He was of the Lutheran faith and attended Trinity Lutheran Church in Riverton.

On September 9, 1948 he married his wife of 65 years, Wilma Caroline Weitzel. Together they raised two boys on a farm in the Pavillion area. While he was farming, he drove truck for Midwest Coast for 3 years and worked for Midvale Irrigation District for 22 years. He then retired and spent 12 winters in Casa Grande, AZ. Not one to just sit and not be busy, he worked for the Hocom Irrigation District while in AZ. In his younger years before the farm, he drove truck for Dick Truck Lines, ran heavy equipment in construction, and was a guide in the Dubois are.

He was a member of the American Legion.

After his retirement his family said that he enjoyed fishing, hunting, cards, and bingo. He loved being around his grandchildren and great grandchildren.

He is survived by his wife, Wilma Kisling of Riverton; his sons, Allen “Bud” Kisling and his wife Susan of Pavillion and Scott “Butch” Kisling and his wife Lisa of Lander; his grandchildren, Brock, Kyle, Jeremy, Dustin, Brigett, Amy, Hayden and Kaylee; his great grandchildren, Kaden, Carson, Peyton, Trindan, Addison, Shelby, Ashland, and Brecken. Also surviving are sisters, Wilma Kasper and Marie House of Post Falls, ID, a sister-in-law, Mary Morrison and numerous nieces and nephews.

He was preceded in death by his parents, Jonathan Kisling and Gladys and Mike Morrison; his brother, Virgil Morrison; and his sisters, June and Kathy.

Memorials may be made to Trinity Lutheran Church or School in care of Davis Funeral Home, 2203 West Main Street, Riverton, WY 82501.