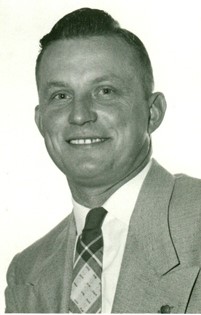 Guestbook 3
Raymond L. "Ray" Bila of Riverton died on Sunday, Jan. 20, 2008, at Riverton Memorial Hospital. He was 84 years old. There will be no local services. Cremation will take place at the Davis Crematory in Riverton. Raymond Ludvik Bila was born in Garrison, Butler County, Neb., on Sept. 6, 1923, the fifth of 11 children born to Joseph Henry Bila and Emma (Svoboda) Bila. He attended public schools in Bee, Neb. Mr. Bila trained in the Civilian Conservation Corps following school, 1940-1942, and then enlisted with the U.S. Coast Guard, serving in the Pacific Theater, including Iwo Jima and Guam, during World War II. Following discharge from military service he moved to Wyoming in 1946, working in a bakery goods store in Wheatland. In September of 1947, he began working for Safeway and served in stores in Douglas, Rawlins, Casper, and as manager in Riverton before his retirement after 35 years with the company. On Jan. 18, 1947, he married Virginia Heil in Scottsbluff, Neb. Mr. Bila was a member of the American Legion Post 8 in Douglas and a life-member of the VFW Post 3628 in Riverton. He is survived by his wife of 61 years, Virginia Bila of Riverton; four children, Raymond Bila Jr., and his wife Maureen of Rapid City, S.D., Stephen Bila and his wife Shirley of Tucson, Ariz., Michael Bila and his wife Paula of Casper, and Rita Stone and her husband Jack of Casper; nine grandchildren, and 10 great grandchildren. Three of 11 siblings also survive, including his brother, Gerald of Colorado and sisters Louise Wall of Omaha, Neb., and Florence Burnett of Lincoln, Neb. He was preceded in death by his parents, four brothers, and three sisters. Memorials may be made to the Help for Health Cancer Bus in care of the Davis Funeral Home, 2203 West Main, Riverton, WY 82501. On-line obituaries are available and condolences for the family may be made at: thedavisfuneralhome.com. Arrangements are by the Davis Funeral Home of Riverton.