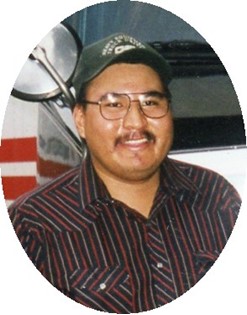 Guestbook 2
Robert Paul “Bob” Manges, 43, of Riverton died Monday, July 28, 2014 at the Wyoming Medical Center in Casper. A Rosary will be Friday, August 1, 2014, 7:00 p.m. at the Great Plains Hall. A Wake will follow later in the evening at Alberta Little’s residence, 419 Left Hand Ditch Road. Funeral Mass will be Saturday, August 2, 2014, 11:00 a.m. at the Saint Stephen’s Catholic Church with burial to follow at the Arapaho Catholic Cemetery. Robert Paul Manges (Little Crow) began his journey on February 7, 1971 with his Arapaho family on the Wind River Reservation. At 1 ½ years old he was adopted by I.H.S. doctor John Manges and his wife, Carol. Robert, and his new brother, Chris moved to rural northern Vermont where he loved tractors, trucks, the outdoors, and drawing. He grew up to be a determined cross country runner, an enthusiastic swimmer, and a fearless downhill skier. Robert enjoyed trout fishing and won awards for his forestry skills.

But more than anything, Robert was known for being big-hearted and loyal to his family and friends. His sense of humor was contagious! Those who loved him in Vermont always wished Robert well as he reconnected with his Arapaho roots and became a dedicated trucker.

After serving in the US Navy, Robert worked at the Arapaho Ranch and as a Sh0-Rap firefighter. He received his CDL and heavy equipment training at Utah State University in Price, Utah. Robert went on to work for various long haul trucking companies including Dick Simon and most recently Wind River Transport.

Robert leaves behind a loving Vermont family, his mother, Carol and step-dad, Mark Kilburn; his brother, Chris and family; his sisters, Breanna Kilburn and Tayva Young and their families; his step-mom, Jeanne Desrochers; his aunt Molly Boyle, his uncle and aunt, Thomas Manges and Jackie Manges and their family; and many friends including his best buddy, Joshua Doyle.

On-line condolences for the family may be made at www. theDavisFuneralHome.com.