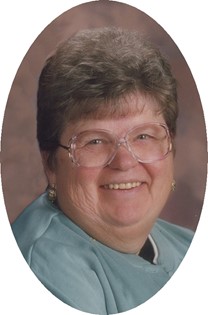 Mary Jean Sutton was born on April 4, 1942 in Lovell, WY to Neal Clark and Helen Ella (Rodgers) Sutton. She was one of four girls. She grew up all around Wyoming as her father worked road construction, and didn't want his girls to grow up without him.

On May 29, 1959, Mary married the love of her life, Virgil Lee Morrison in Riverton, WY. Together they had four children, Ray, Raedell, Kenneth, and Tracy. Upon the tragic passing of Ray, the family moved to Spokane Valley, WA in 1965 and returned to Wyoming in 1968. Arriving back in Wyoming they set up home in Hidden Valley until 1971 when they moved into Riverton.

Mary was a homemaker until 1972 when she was called into the work force. She had many jobs before going to work for the Brunton Company. She worked at Brunton for 26 years before retiring. After retirement, she enrolled in CWC's GED program, something she'd always wanted to do. She graduated with her GED in May of 2002.

She was a member of the Fraternal Order of Eagles Auxiliary for 30 plus years and chaired many local board positions. When her children were young, she was a 4-H leader. After retiring she joined the Red Hat Misfits where she met some very close friends.

Her family said that she enjoyed gardening, baking, sewing, knitting, crafting, snowmen and pansies. She loved fishing with her grandkids and kids. She also loved to camp with her family and her favorite spots were Wind River Lake above Dubois and Beaver Creek above Lander. Easter was one of her favorite holidays because of all the activities with the kids, but any holiday they were around was special for her.

She was preceded in death by her husband, Virgil L. Morrison; her son, Ray L. Morrison; her parents, Neal and Helen Sutton; her sister, Alice Rinker; her great grandson, Jacob Wingert, grandparents, sister-in-laws, brother-in-laws, and numerous aunts and uncles.

Memorials may be made to the Frontier Hospice, with checks being made out to “Friends of Hospice” or Help for Health Hospice in care of the Davis Funeral Home, 2203 W. Main Street, Riverton, WY 82501.

On-line condolences may be made to the family at www.TheDavisFuneralHome.com Services are under the direction of the Davis Funeral Home.