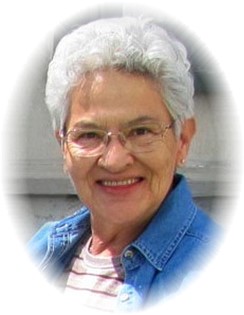 Angeline Trujillo was born on December 24, 1944 in Costilla, New Mexico to Eloy and Avelinda (Arellano) Trujillo. She was one of eight children, two boys and six girls. When she was young the family moved to Rock Springs, Wyoming where she attended grade school. Later the family moved to Hudson, Wyoming where she continued her schooling at Hudson and Fremont County Vocational School in Lander.

She was baptized into the Catholic faith and was a faithful member of St. Stephens Catholic Church. She was a minister of the Holy Eucharist and Lector at St. Stephens.

On May 27, 1962 she married the love of her life, George Norman Baldes in Hudson, Wyoming. They made their home in Riverton, Wyoming where they raised their three daughters, Jody, Tamara, and Shelia.

While raising her family she also worked as Director of Absaroka Head Start, Arapaho Head Start, and was a teacher’s assistant at St. Margaret’s Catholic School.

Her family came first and foremost in her life. Family to her included not only her children and grandchildren but also all of her siblings, their children and grandchildren. She loved having family and friends in for coffee and conversation and you never went away hungry, she made sure of that. She was her grandchildren’s biggest supporter in all of their activities and especially at sporting events. You could always find her in the stands cheering on the whole team and don’t try to talk to her while the event was going on, she was totally involved and would not take her attention off of the team. She still found time to enjoy gardening and being involved with her Bible Discussion Group. She leaves behind a legacy of a strong family and faith.

She is survived by her husband of 52 years, George Baldes; her daughters, Jody Baldes, Tamara Baldes, and Shelia Baldes; her grandchildren, Joshua Baldes, Jared Baldes and his wife Bethany, Justin Baldes, Charlie Baldes and his wife, Mandy, Dalton Baldes, Dino Baldes, and her only granddaughter, Angeline M. Baldes; her great granddaughters, Aurora, Alexandra and Eva; her brothers, Juan B. Trujillo and Edward Trujillo and his wife, Carol; her sisters, Cleo Medina, Carmen Majdic, Cathy Luoma and her husband Bob, all of Riverton, and Hope Poelma and her husband Edwin of Carpenter, WY; sisters-in-law, Alfreda Mills and Virginia Wagner, brother-in-law, Richard and his wife Carol Baldes, several nieces, nephews, and grand nieces and nephews.

She was preceded in death by her daughter, Angeline Marie Baldes; her parents, Eloy and Avelinda Trujillo; and her sister, JoAnn Dollard.