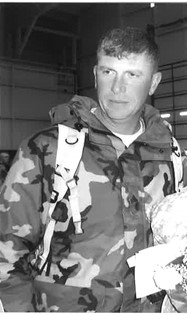 David was living near the VA hospital, where he had been being treated for PTSD as well as a shoulder and ankle injury incurred in the war. David was very excited to be returning to Billings after the holidays.

David was the third of four sons. Born in Minnesota, he was educated in Riverton and graduated from RHS in 1982.

He joined the army prior to Desert storm and served in Kuwait during that operation. He served 7 years with the army before joining the Wyoming National Guard. He then served two more tours in Iraq. David hated not being able to serve longer. He often said he needed to be there with his boys. David was so proud to have served his country and had nothing but admiration for the men he served with. David was given an honorable medical retirement in 2013 having reached the rank of E-5 and was a SGT.

David always loved playing the drums. This passion continued even as he was recovering. He played in bands and was teaching his step grandson Wyitt how to play. The two of them had a special bond. David loved nothing more than to make people laugh, even if he had to set himself up for the laugh. Everyone that knows him knew he would have a huge smile whenever he saw you, even while living with his war demons

David and Leah knew each other most of their lives and finally married in Las Vegas on August 31, 2004. This was during his first tour to Iraq.

David is survived by his wife Leah, brothers Dennis (Wendy) of Tennessee and his family, and Danny of Riverton, his son Jared in Washington, step children, Rory and Arissa Carey, 4 step grandchildren, his mother and father in law Bill and Wanda Carey and brother in law Billy. Also surviving is his aunts, Estelle Rokala of Cokato Minnesota and Mona and Pete Pankey of Bakersfield Ca,.his step father Earl Anglen , (Vicki) of Riverton, and step brother Bob and Verlynn Anglen and step sister Kim and Cory Clemetson, and other nieces and nephews

David’s funeral will be held at Davis Funeral Home on December 27, 2014 at 10:00 AM with full military services at Mountain View cemetery