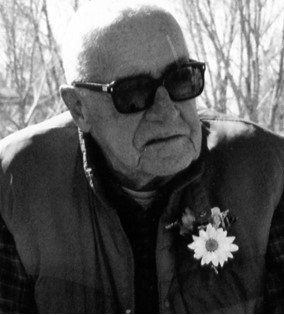 Guestbook 2
George “Jerry” Reeb, 96, of Riverton, died on Sunday, December 21, 2014, in Thermopolis at the Rehabilitation and Care Center. A funeral service will be held on Friday, December 26, 2014, at Davis Funeral Home at 10:00 am with burial to follow at Mountain View Cemetery. Reverend Cleve McSwain will officiate.

George Alvin Reeb was born on March 22, 1918 at home in Silver Creek, NE to George and Edna (Ritz) Reeb. He grew up and graduated from Silver City, NE. After graduation he made his way to Wyoming in 1945 and made it his permanent home.

On December 23, 1952 in Montana, he married Mary Leona Petsch. Together they raised nine children.

He worked at Atwood Equipment and helped build homes at Sand Draw before going to work for Pathfinder Mines in 1956. He retired from Pathfinder as the supervisor of the warehouse in 1980.

His family said that he loved carpentry work, cutting firewood, gardening, fishing, traveling and playing cards, especially Canasta and Dominoes. He loved spending time with his family and friends.