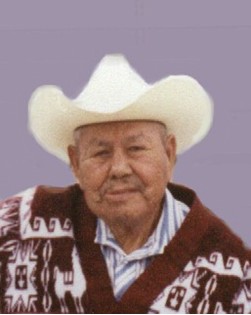 He was a life-long resident of the Wind River Indian Reservation.

He married Veronica Smith in 1948. She preceded him in death.

Mr. Gambler was of the Catholic faith and active member of St. Stephen's Catholic Church.

He worked as a heavy equipment operator for the Bureau of Indian Affairs on the Wind River Reservation. He had been manager of the Arapaho Ranch for many years and had worked on road construction on many highways in the state. During the uranium mining era, Mr. Gambler worked as an operator for Union Carbide, Lucky Mac Mine, and Sims Corp.

He was a member of the Northern Arapaho Tribe where he served on the Council of Elders, was a past member of the Eagle Drum Group, and was an Arapaho culture teacher.

His family said Mr. Gambler enjoyed watching his grandchildren participate in various activities, attended all birthday parties, graduations, and picnics of his family and friends. He was always prepared to give Indian names and send the blessings.