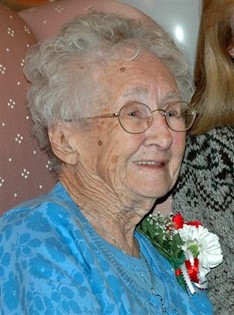 Guestbook 0
Funeral services for Lillian (Leseberg) Meckem of Dubois will be at 11 a.m. Saturday, March 1, at Our Lady of the Woods Catholic Church in Dubois. The Rev. Father David Gau will officiate. Interment will follow at the Dubois Cemetery. A rosary will be said at the church at 7 p.m. Friday, Feb. 29. Mrs. Meckem died Friday morning, Feb. 22, 2008, at Morning Star Care Center in Fort Washakie. She 101 years old. Lillian Leseberg was born in Lander on Nov. 7, 1906, to Harry and Lula Edith (Carr) Leseberg. She was five years old when her mother died after giving birth to her brother. Her Carr grandparents raised her in the Lander Valley and she attended schools in Lander. She spent many summers with her father and step-mother in Dubois at the old Circle Ranch (now the Bear Creek Ranch on East Fork) which was owned by her father. After completing high school, she moved to Dubois to work at the Stringer Hotel. She worked in the Dubois Post Office, which was located in the hotel. She married Louie Jacob Meckem on May 28, 1928, at the old Circle Ranch. The couple built the Yellowstone Motel and Texaco Service Station in Dubois and ran the businesses for 20 years. During World War II, they traveled with their three children to Arizona and California where Mr. Meckem worked on several war projects. They returned to Dubois at the end of the war. Mr. and Mrs. Meckem sold their motel in 1949 and opened a Marshall Wells store. After the loss of their only son, Jon Louis Meckem, who was killed by a tornado in Shell Canyon on June 26, 1959, the couple sold the Marshall Wells store in 1960 and moved to Anchorage, Alaska. They spent five years there and moved back to the Lower 48 after the big earthquake of 1964. They traveled the Western states for several years before settling in Nyssa, Oregon. They lived in Nyssa for 13 years before moving back to Dubois in 1984. Her family said Mrs. Meckem enjoyed participating in all church functions. She also enjoyed reading, crafts, planting flowers, and working in her garden. She had a special interest in family history and loved family gatherings. She was preceded in death by her husband, Louie, on July 25, 1997, after 69 years of marriage; her son, Jon Louis; her parents; her brother; her son-in-law, Danny W. Stevens; a grandson-in-law, Dale Wyant, and a great grandson, Zane O'Neal. She is survived by her two daughters, Dorothy Lou Stevens, and Donna Marie Landen and husband Orville, all of Dubois; 11 grandchildren, 15 great grandchildren, and eight great-great grandchildren. Memorials in her name may be made to High Country Senior Citizens or the Dubois ambulance. Services are under the direction of the Davis Funeral Home of Riverton.