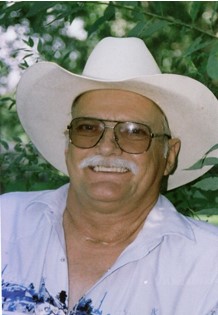 Guestbook 2
Memorial services for Larry K. "Dusty" Goodrich of Riverton will be at 10 a.m. Friday, Feb. 29, at the Davis Funeral Home of Riverton. Pastor John Gocke will officiate. Inurnment will follow at Mountain View Cemetery in Riverton. Military honors will be offered by the Wyoming Army National Guard. A reception will follow at the Eagles Hall on North Broadway in Riverton. Mr. Goodrich died at his home in Riverton on Tuesday, Feb. 26, 2008, following health complications. He was 57 years old. Larry Kay Goodrich was born in Lander on Dec. 25, 1950, the son of Kay Elsworth Goodrich and Angeline Hortence (Potter) Goodrich. He grew up in the Big Horn Mountains above Ten Sleep but spent much of his life in Lander where he raised his children. He attended school in Buffalo. On Feb. 7, 2005, he married Melody Fuller in Pocatello, Idaho. Mr. Goodrich was of the Christian faith. He was engaged in the trucking industry, having been a local and long-haul trucker for over 30 years. He had worked in the uranium mines in Jeffrey City and the Gas Hills. He also worked as a rancher and owned and ran a dude outfitter business in Atlantic City, taking people on pack trips in the mountains. Mr. Goodrich was a member of the Eagles Lodge. He is survived by his wife, Melody Goodrich of Riverton; daughters, JoAnne Carter of Boise, Idaho, Brandi Pierson, Amanda Foos and husband Rob, and Amber Goodrich, all of Riverton; 13 grandchildren, Ryan Foos, Randy Foos, Rochelle Foos, Ryley Foos, Dusty Courtney, Destiny Johnson, Larae Pierson, Hanna Berry, Halie Berry, Ryan Ingwerson, Purity Buffalo, Kevin Wilson, Jr., and Kaden Wilson; brothers, Bob Goodrich of Riverton, and Jim Goodrich and his wife Sue of Malad, Idaho; sisters, Hazel Eastman of Riverton, and Diane Rosales and husband John of Pocatello, Idaho. He was preceded in death by his mother, Angeline Moses; father, Kay Goodrich, and infant sister, Mary Anne Goodrich. Memorials may be made to Community Home Oxygen, in care of the Davis Funeral Home, 2203 West Main, Riverton, WY 82501. On-line obituaries are available and condolences for the family may be made at: thedavisfuneralhome.com Services are under the direction of the Davis Funeral Home of Riverton.