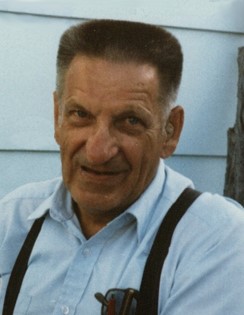 Guestbook 0
John G. Hemming of Thermopolis died Tuesday, March 18, 2008, at Hot Springs County Memorial Hospital. He was 83 years old. Memorial services will be held at 2 p.m. on Wednesday, March 26, at the Davis Funeral Home of Riverton with the Rev. Cleve McSwain officiating. Cremation has taken place. John Gust Hemming was born on Feb. 25, 1925, in Carey, Wis. to Gust Emili Hemming and Alina Josephina (Abramson) Hemming. Mr. Hemming entered the U.S. Army in September of 1943 and served in the European Theater, including Normandy, Northern France, Rhineland, and Central Europe. He received four Bronze Stars and a Purple Heart. He was honorably discharged in February of 1946. Before World War II, he worked as a logger in Wisconsin. After the war, he joined the U.S. Merchant Marine and traveled around Asia, Europe and the Great Lakes. He later worked in construction around Wyoming, then in the Gas Hills, and spent 20 years in Alaska, building the Alaska Highway and the Alaska pipeline. Retiring in 1982, moved to Rogue River, Ore., then to Thermopolis where he spent his time repairing things and gardening. Mr. Hemming is survived by children, Dawn Johnson and her husband Val of Las Vegas, Nev., Dee James and her husband Ron of Las Vegas, Shawn Hemming and his wife De Etta of Riverton, Johnny Hemming and his wife Carrie of Guam, John Okkonen and his wife Tina of Michigan; a step-son, Keith Barnett and his wife Lois of Virginia; a sister, Miriam Koskela; numerous grandchildren and great grandchildren. He was preceded in death by his parents, Gust and Alina Hemming; wives, Mary (Grubb) Hemming and Jean (Allison) Hemming; a sister, Ruth Hendrickson. On-line obituaries are available and condolences for the family may be made at: thedavisfuneralhome.com Services are under the direction of the Davis Funeral Home of Riverton