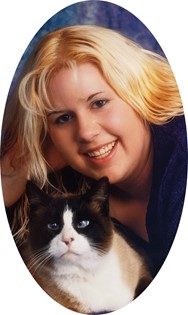 Magedelina Ann Kuhn was born on January 4, 1984 in Lander, WY to Ernest H. and Pam F. (Taylor) Bulow. She grew up in Shoshoni, WY and attended schools there graduating with the class of 2002 from Shoshoni High School. She had been working with an on-line to obtain her degree in Business Management.

In 2011 she married Billy Joe Kuhn on April 9, 2011 at the First Baptist Church in Shoshoni.. She worked at the Mushroom Farm for six months until she obtained a job as a janitor at School District 24 in Shoshoni. She was also a homemaker raising four children. The last two years she and the family lived in Alcova, WY.

When she was younger she was active in 4-H and earned many ribbons. She enjoyed going to the lake, music of all kind’s, spending time with her family, sister, and especially her children, whom were her life. She was loved by many and will be missed by many.

She was preceded in death by her grandfather, Ernest W. Bulow and uncle, Steven Mark Taylor.

Memorials may be made to The Bulow Family in care of Davis Funeral Home, 2203 West Main Street, Riverton, WY 82501.