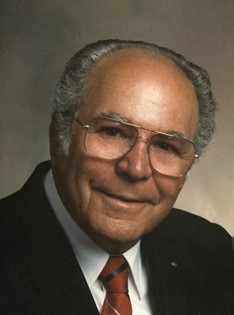 Memorial services are at 10 a.m. on Monday, March 31, at the Davis Funeral Home of Riverton. The Rev. Cleveland McSwain of the Methodist Church will officiate, with committal rites by the Masonic Lodge.

Inurnment is at 3 p.m. Monday March 31, at the Dubois Cemetery. The will be a VFW committal at the gravesite.

Mr. McGuire was a World War II veteran, serving with the U.S. Navy as a Seaman 1st class. Following the war, Mr. and Mrs. McGuire sold their family home in Bonne Terre, Mo., and bought the Lily White Limestone Company mine outside of Rogers, Ark. Mr. McGuire sold the mine and settled in Climax Colo. There he was the open pit mine supervisor for Climax Molybdenum (elevation 11,380'). During that time, Mr. McGuire was credited with designing a ground support method using relock fabric and expansion roof bolts.

This was found to be safer and cheaper than timber or old roof bolt method and is still employed throughout the mining industry and in some highway departments in steep rock cuts.

Moving to a lower elevation, he worked as sales engineer and branch manager for the Wortham Machinery Company located in Riverton.

His family recalls that Mr. McGuire enjoyed joking and saying he worked for the biggest Cat House in Wyoming.

Mr. McGuire left Caterpillar and he and his wife bought the Twin Pines Lodge in Dubois.

Mr. and Mrs. McGuire sold the Twin Pines and returned to Riverton. Mr. McGuire then went from Wyoming State Mining Inspector to mine safety superintendent for Western Nuclear in Jeffrey City.

During his retirement, he worked part-time for the Wyoming Game and Fish and volunteered to work at the National Big Horn Sheep Center in Dubois.

A lifelong love of fishing culminated in a Dubois retirement home on the Wind River and the family said hardly a day went by that Mr. McGuire didn't wet his line. Not only did he love to hunt and fish but enjoyed the preparation of the game, and providing dinner entrees along with his stories.

He often told stories of running the rapids of the River of No Return with Dr. Blackadar, catching fish, counting winter kill deer, Alaskan wilderness stories of panning gold, hunting the grizzly and flying in a pontoon airplane to the sources of the Yukon, fishing and collecting Eskimo art.

His skill at cooking in hunting camp earned him invitations to hunt and fish from Mexico to Alaska and lasting friendships.

His family said McGuire has passed this rich heritage of sportsmanship, love of the outdoors and how to tell a good story on to his grandsons.

Mr. McGuire was able to provide jobs for his nephews in Alaska and Dubois they often reflect on "working for Uncle Mac" and how much fun they had. In trying to keep in touch with his siblings they hosted a reunion at a fishing resort at Bull Shoals, Ark.

Mr. and Mrs. McGuire spent several winters there, fishing and returning to Dubois in the spring. Among those accommodated at their home during the summer was his mother-in-law.

Mr. McGuire was a 32nd degree Mason. He was a 50-year "life" member of the Masonic Lodge, inducted in Kokomo, Colo., a ghost town which is now under water. He was a member of Dubois Lodge No. 53 and Korein Shrine. Mr. and Mrs. McGuire hosted many 4th of July picnics in Dubois for Shrine participants from Riverton, Lander, and Dubois, following the parade.

He was on the board of directors for Dubois High Country Senior Center. Mr. McGuire was in Scouting for many years, both as Leader and BSA Council member.

Mr. McGuire was preceded in death by his wife of 67 years, Anna Lee, on Nov. 14, 2004; parents, Lloyd Robert and Katherine McGuire; a sister, Katherine Cleek, and brothers, Lloyd and Weldon R. McGuire.

Memorials may be made to the Shriners Hospitals for Children-Intermountain Unit, Fairfax Road at Virginia Street, Salt Lake City, Utah 84103.