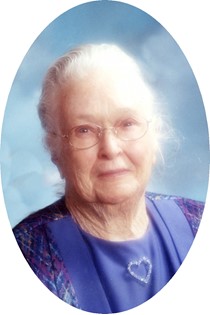 Guestbook 9
Funeral services for Rama Forest Major, 96, will be held 11:00 a.m., Monday, January 25, 2016 at Davis Funeral Home. Interment will follow at Mountain View Cemetery. A viewing will be held 9:00 a.m. until service time on Monday.

Mrs. Major passed away at the Wind River Rehabilitation and Wellness Tuesday, January 19, 2016.

Rama was born July 7, 1919 in Lynch, Nebraska, the daughter of Earl and Gladys (Ward) Davis. She and her family moved to Wyoming in 1937 after irrigation was opened up in the Riverton area.

As a girl, she worked in various homes and at the Shoshoni school cafeteria for several years. After she married Wayne Major of Riverton on April 12, 1943 she became a homemaker and enjoyed preparing meals for their friends and relatives. She enjoyed writing letters and had many correspondents.

She made her choice to serve the Lord at an early age and was faithful to that.

Survivors include her sister, Luree Dutton of Cody, Wyoming, two sons, Wayne Jr. and his wife, Wanda of Riverton and Leon and his wife, Ava of Vale, Oregon. She left behind four grandchildren, Brent of Laramie, Wyoming, Shawna of Ronan, Montana, David of Tucson, Arizona and Heidi of Vale, Oregon, plus many nieces and nephews from both sides of the family.

She was preceded in death by her parents, husband, Wayne and a granddaughter, Michelle Snelling.