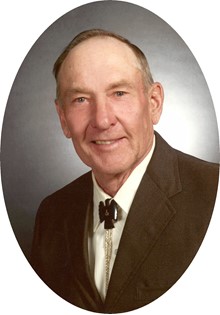 Guestbook 4
Leonard Dale Gradert, 79, of Riverton, died on Monday, January 18, 2016, at Sage West Healthcare- Riverton. A memorial services will be held at 1:00 pm on Friday, January 22, 2016, at the United Methodist Church in Riverton. Pastor Mark Rader will officiate. Inurnment will take place at a later date at the Fort Bridger Cemetery. Leonard was born on June 4, 1936, in Mountain View, WY to Francis A. and Thelma (Beach) Gradert. In his early years the family lived in Robertson, WY and the surrounding areas before moving to Casper, WY where he graduated from Natrona High School. After high school he married Kathy Marie King and they moved to Rock Springs, WY where they raised their two daughters. He owned and operated his own sheet metal business as well as worked at the Jim Bridger plant. He lost his wife in 1991 but remained in Rock Springs until spring of 1996. He then married Mary Griffin-Hall on April 6, 1996 and moved to Riverton to make their home. He was an active member in the Wyoming National Guard, Shriners, Mason, NRA, Rock Springs High School Rodeo Association, and the Cattlemen’s Association. He also enjoyed working on the ranch and was a gun enthusiast. All of his life, Leonard loved camping, hunting, fishing, and trapping in the Wyoming wilderness with family and friends. Because of his hunting expertise, he often guided friends through successful and exciting hunts. During his retirement years, you would find Leonard checking his trap lines, hunting coyotes, selling his pelets, branding calves, and spending time with family, friends, and grandkids. He is survived by his wife, Mary Gradert; daughters, Linda Crosland (Rick), and Brenda Cox (Doug), step- daughter, Starla Craig (Lee), step-son, Andy Hall (Jennifer); brother Clayton Gradert; sister, Donna Brunette; seven grandchildren and three great grandchildren. He was preceded in death by his parents, Francis and Thelma Gradert, Grandparents Emily and Elizabeth Gradert, and his first wife, Kathy M. Gradert. In lieu of flowers, please make donations to the Shriner Children’s Hospital or a charity of your choice. Send donation to Davis Funeral Home, 2203 West Main Street, Riverton, WY 82501 and they will disburse accordingly. On-line condolences may be made to the family at www.TheDavisFuneralHome.com. Services under the direction of Davis Funeral Home.