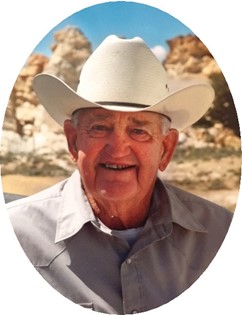 Guestbook 17
John Thomas (Tom) Grigg, who was a rancher, cowboy, brand inspector, and World War II veteran, died on Tuesday, February 2, 2016, near his home in Riverton, WY. He was 89 years old. He was also a dear friend, a cowboy’s cowboy, a wonderful man, and a doting husband and father.

Mr. Grigg was born at home in Shoshoni, WY, on March 5, 1926, to John Henry “Johnny” and Helen “Kunka” (Maquis) Grigg, a ranching family that ran both cattle and sheep in the Central Wyoming area.

He started working early, as did most young boys. “The Chapel Brothers ran horses in the northwest, and the CBC round up happened once a year where they would gather up thousands of horses, on thousands of acres. My dad [John Henry “Johnny” Grigg], took me on my first roundup when I was 10. We gathered those horses, and I got paid $1 a day to help bring them in,” Mr. Grigg told Rodeo News in 2013.

The Grigg family homesteaded in the Riverton area, where Mr. Grigg and his wife, Shirley Grigg, have lived for the past years. Right after Mr. Grigg graduated in 1941 from Riverton High School, he joined the United States Air Force serving during World War II. Thanks to the GI Bill, he went to the University of Wyoming, where he started competing in rodeos.

At that time, Mr. Grigg’s dad ran the Pitch Ford Ranch in Meeteesee, WY. He came down to watch his son in Shoshoni. When he told his son that he needed help on the ranch, Mr. Grigg went with his father and worked at the Pitch Fork, running 1,500 head of cattle, 20,000 head of sheep and a round-up wagon.

It was in Meeteesee that Mr. Grigg met his wife of 64 years, Shirley Jean Clark Grigg. “She didn’t like me at first – you know how are cowboys are,” Mr. Grigg told Rodeo News. She came around after a couple of years, and they were married in 1952. She became his ranching and rodeo partner, and they had three children: Tracy, Tom and Kristie.

The young family spent weekends going to rodeos. Mr. Grigg won the All Around at the 1953 Cody Night Rodeo. “We drove the 50 miles to Cody about three times a week to the night show,” said Mrs. Grigg. “We pulled a two-horse trailer with a car. Nobody in those days had a pick up.”

Over the years, Mr. Grigg trained almost all of his own rodeo horses. He added team roping when he turned 50 – often partnering with his father and his son Tracy Grigg. He also mentored his son Thomas Grigg in the cutting event. Mr. Grigg continued to compete in rodeos and later joined the Senior Pro Rodeo, making their finals for several years.

During his professional career, Mr. Grigg and his wife managed the JE Ranch near Riverton and the Matador Ranch in Dillion, MT. They moved back to Riverton in the late 1970s, where Mr. Grigg worked as a brand inspector, retiring at age 70.

When the Central Wyoming College moved their rodeo program to their present location in Riverton, the college did not have an outside arena. The Griggs opened up the family homestead – with a built-in arena – for the college rodeo team to practice.

After the college built its own practice area, college students continued to board their horses at the Grigg place, with Mr. Grigg offering a coaching tip to willing students. “If somebody asks for help, I make a little suggestion on what to do,” he told Rodeo News. “Rodeo has been my life. Comes natural I guess.”

Mr. Grigg summed up his philosophy in life: “Treat everybody the same and do your best in everything you do.”

During these last few years, Mr. Grigg could be found every morning at The Trailhead Restaurant having breakfast with his friends. “We will never be quite the same without you, and you will certainly never know how you touched our hearts with your kind soul,” wrote The Trailhead management on their Facebook page summing up the feelings of many. “We loved you and miss you dearly.”

He is survived by his wife, Shirley, his daughter Kristie Lynn Grigg, and his son Thomas Clark Grigg and his son’s wife Kristi Hendry. His son Tracy Grigg preceded him in 2010 and his sister, Elizabeth “Betty” Hatzell in 2005.