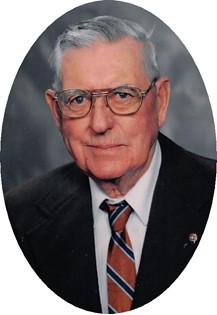 Guestbook 9
Donn Marlatt, 98, of Riverton, died at Sage West Health Care- Lander, on Monday, February 01, 2016. A viewing will be held on Friday, February 5, 2016, at Davis Funeral Home from 5:00 pm to 7:00 pm. The funeral service will be at 10:00 am on Saturday, February 6, 2016, at Davis Funeral Home with Reverend Dale Basque and Reverend Dean Whitaker officiating. Burial will follow at Mountain View Cemetery with full military honors.

Donn Lee Marlatt was born on December 30, 1917 in Riverdale, NE. He was one of nine children born to Fredrick Wilber and Grace Gertrude (Kirch) Marlatt. His birth was one of the many events that happened to the family as they traveled from Toulon, IL to Pine Bluff, WY in a covered wagon. The family consisted of nine children, two of whom passed away as infants, but seven of them survived and went on to have families of their own.

Donn attended schools in Pine Bluff and Albin, graduating from Albin High School with the class of 1935. While in high school he played basketball.

On December 31, 1941 he enlisted in the U.S. Army. He was only in basic training for 20 days when he was sent overseas to fight in WWII. He flew with the 43rd Bomber Group of the 5th Army Air Corp stationed at Port Moresby in Papua, New Guinea. He flew many bombing missions over the Japanese held islands in the South Pacific as a bomber photographer. He lost his brother, Fay, whom was killed in Okinawa during the war.

After being honorably discharged from the U.S. Army, he returned to the family farm in Pine Bluff. Shortly after returning he met and married his best friend and the love of his life, Billie Milnes of Fort Laramie, WY. They married on September 1, 1946 in Kimball, NE. While in Pine Bluff he played with the semi pro, Marlatt Baseball Team, they traveled around the country playing. One of his best memories was watching his brother being struck out by the famous Satchel Paige. They moved to the Riverton area and homesteaded and began raising their three children. After the blizzard of ’49, the family moved to Cheyenne where Donn worked for the railroad for 2 years before moving back to Riverton to farm again. In 1954 the family moved into Riverton where he worked for the U.S. Postal Service for 25 years before retiring. Not one to sit idle, he then worked for the Fremont County Road Department for another 10 years before actually retiring.

His family said that he enjoyed fishing, camping, and snowmobiling. He never lost his love of baseball by coaching and officiating, and he enjoyed every game.