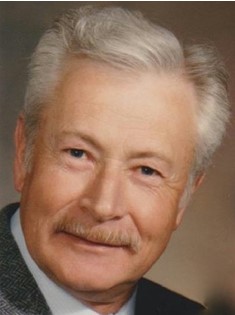 Guestbook 12
Hugh R. Frohbieter, also known to many as “Bud” Frohbieter, was born January 8, 1933 in Rawlins, WY to Lucille Olive Hass and Hugh William Frohbieter. He went to his eternal home on February 21, 2016 in Glendale, AZ after a long journey with Alzheimer’s.

He is survived by his wife, Elaine Frohbieter, from Glendale, AZ, his daughter, Teri Smith of Riverton, his daughter Elaine Burgess and husband Gentry from Kirkland, WA, and his grandchildren; Nicholas and Aften Smith from Castle Rock, CO, Ty and Ingrid Frohbieter from Scottsbluff, NE, Lana and Graham Lewis from Nisland, South Dakota, Alisa Frohbieter from Tulsa, OK, Victoria Burgess from Laramie, WY, and Grant Burgess from Kirkland, WA.

During his teen years, Hugh mad his choice to serve God, and kept faithful to his vows all of his life. He had a great love and respect for God’s word.

He was inducted into the Army in April of 1953 and was honorably discharged in April 1955. After his discharge from the arm he worked for Paul and Emil Leonhardt in Riverton, then for his brother-in-law Ed Yung in Kimball, NE. During that period of time he married Milly Peterson. They drove over the Wyoming line to Pine Bluffs to get married so their marriage certificate would say that they were married in Wyoming! They then moved to Laramie, WY where Hugh worked for the Diamond Horseshoe Truck Stop.

In 1957 he heard about a new mining and mill operation opening up close to his family’s summer cabin on the Sweetwater River, at the location of the old “Home on the Range” post office. The town was eventually renamed Jeffrey City, after it’s benefactor, “Doc” Jeffrey. Dr. Jeffrey had worked with Hugh’s mother Lucille, who was a nurse in the old Rawlins hospital. Hugh worked for Western Nuclear for almost 30 years, first as a shift worker in the mill and then as a Mill Superintendent and was retained in the employ of Phelps Dodge, the purchaser of the operation during the decommissioning of the mill and mine. He often joked that he was the last man standing, watching the tumbleweeds and antelope take over the town.

After Western Nuclear closed in 1985, Bud and Milly moved to Riverton and Bud worked for BTI driving truck for 4 years, then as the Truck Superintendent until he retired in December of 1996. In all of his years of driving the roads of Wyoming and as a truck driver, he never was in an automobile accident.

In 2001 Hugh married Elaine Marx and they spent half of the year in Wyoming enjoying the summers, and half the year in Arizona enjoying the warm winters and developing many new friendships there. In 2012 they sold the Wyoming place and have lived full time in Glendale since then, where Elaine has been lovingly by his side throughout his illness.

Hugh was known for his enjoyment of the outdoors (especially in Wyoming!), his love of all his family and extended family, and his constant, fun-loving, and sense of humor. He could fix anything, keep his family fed with wild game, and he never met a stranger. He will be greatly missed and fondly remembered.

Services will be held at Davis Funeral Home on Friday, February 26th at 2:00 pm with a reception to follow.