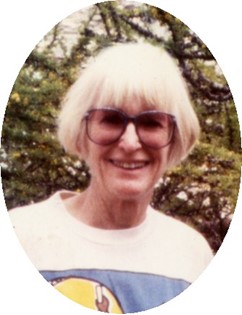 
Helen Dorward Krause, 89, died Friday, April 8 at Westward Heights Care Center in Lander due to complications from a broken hip.

Memorial Services will be held at 4 p.m. on Thursday, April 14, 2016 at Davis Funeral Home with a Reception to follow at the Reach Clubhouse, 622 N. 8th West in Riverton.

The daughter of Charles Wesley Dorward and Virginia Holmes Dorward, Helen was born on October 2, 1926 in the family home in Kittaning, PA, where her father was a civil engineer. In 1935, her mother, recently widowed, moved with Helen and her sister to California, to join her second husband Charles Albert Reuss. In the 1930s and 1940s until World War II broke out, California was an idyllic place to grow up.

Helen graduated from High School in Paso Robles, California in 1944 and went on to receive a B.A. in Political Science from UCLA in 1948 and to work several years for an insurance company in San Francisco. In 1950, she met and married George Bainbridge Krause and they spent their honeymoon at the Wort Hotel/Casino in Jackson, Wyoming and then at the Krause family cabin below Brooks Lake under five feet of snow.

For several years the couple resided in California where George worked as a civil engineer before relocating to Riverton, Wyoming in 1952 when he took over with partner Richard Schaefer the Wind River Honey Company, founded by his father, the late George Brown Krause in 1926.

Moving from California to Riverton was a radical life change for Helen, an avid reader who loved opera and the symphony, but she reinvented a life for herself, becoming active in Arts in Action through Central Wyoming College, the League of Women Voters, and the Fremont County Chapter of the Wyoming Archeological Society, which she enjoyed until well into her 80s. She loved travelling, wintering in San Miguel de Allende, Mexico, and spending time with her family.

Helen was preceded in death by her parents, husband, sister, Adelene Madsen and brother, Lewis Dorward.