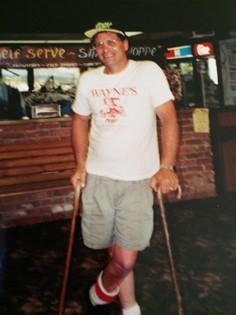 Guestbook 8
David “ Blue” Brewbaker, 62, of Riverton, died on Saturday, April 16, 2016, in Casper, WY at the Wyoming Medical Center. A viewing will be held on Tuesday, April 19, 2016, at 1:00 pm at Bustard’s Funeral Home in Casper. A memorial services will be held at 2:00 pm on Thursday, April 21, 2016, at Davis Funeral Home in Riverton, Inurnment will follow at Mountain View Cemetery. A reception will follow the inurnment at Main Manhattan located at 1409 West Main Street in Riverton (the old VFW building).

David Brewbaker was born on March 16, 1954 in Vandalia, IL to Clarence and Marilyn Brewbaker. In the 1960’s the family moved from Illinois to Wyoming. David graduated from Riverton High School.

He worked in the oil fields all of his adult life.

He enjoyed fishing, , singing and playing his guitar, riding and building motorcycles, and telling stories,. He loved spending time with his grandchildren, family, friends, and his dogs.

Memorials may be made to the family in care of Davis Funeral Home, 2203 West Main Street, Riverton, WY 82501.