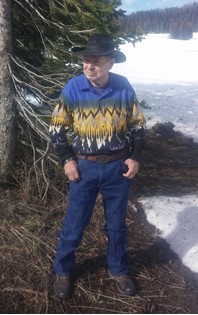 He was born on June 4, 1935 in Douglas, Wyoming, son of William and Esther (Roher) Watson. He attended the Red Creek School House in Bates Hole, near Casper before moving with his family to Kinnear and graduating from Morton High School. Following graduating, Bill enlisted in the United States Army. After being Honorably discharged, Bill lived throughout Wyoming before moving to Wilson, WY in 1987. Bill remained in the Wilson area until he moved to Casper, due to health reasons.

Throughout his life, he worked as a rancher, logger, carpenter, and was a caretaker for several ranches throughout the Wilson area. One of his last jobs was running a snow removal business in the Wilson area.

Bill was an active member of the Presbyterian Church in Jackson, Wyoming but most recently attended Highland Park Community Church in Casper, WY.

Survivors include his sons, Bill Watson and Jim Watson, both of Casper; a half-brother, Robert Watson of CA. 2 grandchildren, 2 great grandchildren and, 2 step-grandchild

He was preceded in death by his parents and sister, Winifred.