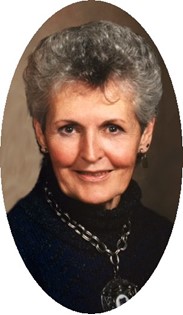 Marcia Russell, 91, also affectionately nicknamed “Mimi” by her grandchildren, of Riverton, passed peacefully away on the morning of Wednesday, April 20th at the Help for Health Hospice Home. A Celebration of Life will be held at the Davis Funeral home on Saturday, April 23rd, 2016, at 2:00 PM.

Marcia Jane Duffy was born on July 13th, 1924 to James Joseph Duffy and Mabel Theresa (Boggs) Duffy. She grew up in Nevada and graduated from White Pine High School.

Mimi grew up during the depression and after the death of her aunt Clara; her family grew to seven with the addition of Betty, Art and Fred. Eventually the family moved to Ely, Nevada.

Marti married Robert Barber and had a son, Jack who was eight months old when her husband was killed in a crash returning home from the Pacific.

Marti moved to Ely where she had friends and support. All of her friends were determined to set her up with John Russell and it worked. And everyone cheered when they met on a Friday evening after work at the Capital Club.

On May 26th, 1946 she married John Joseph Russell in Boulder City Nevada. Together they had three children, two sons and a daughter along with Jack. John was a mining engineer and they moved with the job. They started in Ely, Nevada and then moved to Pioche, Nevada. Then on to Stibnite, Idaho. Then to Bishop, California and back to Tempiute, Nevada. Then to Canon City, Colorado. Then they moved from Canon City to Riverton for the first time. John worked in the Gas Hills for Utah Construction and Mining. They then transferred with Utah to Shirley Basin to supervise their solution mining. Then they moved their family to Las Vegas, Nevada where John sunk the shafts for the underground nuclear test sites. After the completion of that project, the Russell’s moved back to Riverton where John was the mine superintendent for Pathfinder Mines until their retirement.

During all this, Marti never had a problem following John’s lead. “Sometimes we only had a day’s notice that we were moving, and I had 4 kids and usually a dog.” “My life has been a wild ride with a brilliant man and I don’t regret a minute of it.”

Marti enjoyed golf and a good book. She loved caring for people and fed many a stranger. She was an accomplished pilot and she loved flying. She also loved driving a fast car and the Russell’s always had a fast car. She was very proud of all her grandchildren and never hesitated to tell them how much she loved them. She was the grandmother everybody wished they had.

Marti was preceded in death by her parents, Jim and Mabel Duffy; husband, John Russell; son, Robert John Barber Russell; and her brothers, Art and Fred Waugh and Jim Duffy.

In lieu of flowers, the family request that donations be made to Help for Health Hospice in care of the Davis Funeral Home, 2203 West Main Street, Riverton, WY 82501.