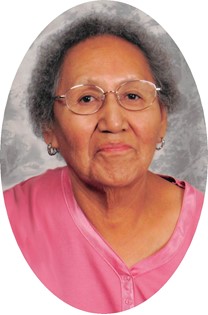 Guestbook 3
Pauline Lincoln, her Indian name was Ho3o Cebsei (Walking Star) 76, of Riverton, died at Sage West Hospital – Riverton, on Tuesday, May 31, 2016. A rosary will be recited at 7:00 pm on Sunday, June 5, 2016, at 43 Oberg Lane. The funeral service will be at 10:00 on Monday, June 6, 2016, at St. Stephen’s Catholic Church with Father Phil Wagner officiating. Burial will follow at Arapaho Catholic Cemetery in St. Stephen’s.

She was baptized into the Catholic faith and attended St. Stephen’s Catholic Church.

On July 21, 1962 at the St. Stephen’s Catholic Church she married her husband of 49 years, Leroy Lincoln. He preceded her in death in March of 2012. For a short time after they were first married they lived in Canton, OK. They came back to the Wind River Reservation and made their permanent home on Oberg Lane where they raised their family.

She worked for St. Stephen’s Indian School as both a receptionist and a teacher’s aide.

She served on the Northern Arapaho Pow Wow Committee.

She enjoyed beading, going to the casino, and attended many Pow Wow’s. Above all she loved being with her grandchildren and great grandchildren.