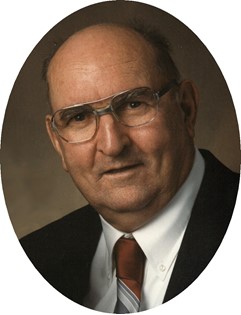 Guestbook 8
A celebration of life for Doyle W. White of Riverton will be held at 2 p.m. Saturday, April 12, at the Davis Funeral Home of Riverton. Interment will follow at Mountain View Cemetery in Riverton. There will be a viewing from 5 to 7 p.m., Friday evening, April 11, at the funeral home and one hour preceding the service on Saturday. Mr. White died on Tuesday, April 8, 2008, at the Western Nebraska Veterans' Home in Scottsbluff. He was 90 years old. Doyle Wayne White was born on his grandparents' homestead in Keya Paha County, Neb., on Aug. 16, 1917, the son of Jesse Lowell White and Pearl May (Cook) White. He attended the Keya Paha County Schools. He married Katherine McDole Manning on July 13, 1937, on his grandparents' 50th wedding anniversary. Three children were born to this union. Mr. White worked for the Lackaff Cattle Company in Bassett, Neb., and was a volunteer firefighter before moving to Riverton where he worked for Gilpatrick Construction Company until his retirement. After 22 years with Gilpatrick, he turned to woodworking and created many unique projects. He also developed a passion for rebuilding and restoring antique engines. Mr. and Mrs. White traveled throughout many states showing the engines. Mr. White was a founding member of the Wind River Flywheelers Club and belonged to the Cowboy State Antique Steam and Gas Engine Association. He was also a charter member of the American Legion in Bassett, Neb., a membership which he held for over 60 years. Survivors include, a son, Jim White and his wife Tiny of Sedgwick, Colo.; daughters, Beth Childers of Aurora, Colo., and Maredith Huntley and her husband Gary of Aztec, N,M.; seven grandchildren, and 12 great grandchildren. He was preceded in death by his wife, parents, two brothers, one sister, a granddaughter, a grandson, a great granddaughter, and son-in-law, Paul R. Childers. Memorials may be made to the Western Nebraska Veterans' Home in care of the Davis Funeral Home, 2203 West Main, Riverton, WY 82501. On-line obituaries are available and condolences for the family may be made at: thedavisfuneralhome.com Services are under the direction of the Davis Funeral Home of Riverton.