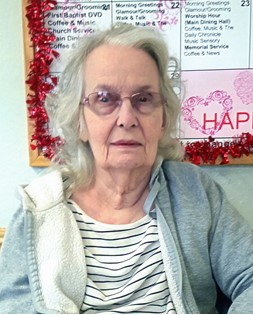 Guestbook 0
Joyce Eilerman, 84, of Riverton, died at the Help for Health Hospice Home on Tuesday, June 7, 2016. As were her wishes, cremation has taken place and no service will be held.

Joyce Swinnock was born on July 25, 1931 in Fresno, CA to Ross and Irene (Joyce) Swinnock. She grew up in the Fresno area and attended schools there. After high school graduation she attended Fresno City College and Fresno State College earning her Bachelor’s degree as a Medical Laboratory Technologist.

In 1952 she married her first husband, Kenneth Oldershaw, before he left to serve in the Korean War. They had three daughters together and later divorced. On April 28, 1990 she married the love of her life, Richard Eilerman, in the San Luis Obispo-Law Library.

She worked as a Medical Laboratory Technologist in Fresno & San Luis Obispo, CA.

She lived in Kerrville, TX for twenty two years and San Luis Obispo, CA for two years before coming to Wyoming.

She and her husband, Richard, were members of the auxiliary of the Pederson Regional Medical Center, where the made and distributed popcorn weekly to the staff, patients, and visitors. Everyone looked forward to the “popcorn day”.

She enjoyed square dancing, round dancing, reading, and collecting everything and anything that had butterflies in it. She loved to travel to witness her children and grandchildren, and great grandchildren’s milestones.

She was preceded in death by her parents, Ross and Irene Swinnock; husband, Richard Eilerman, sister, Patricia Smith; and brother, Robert Swinnock.