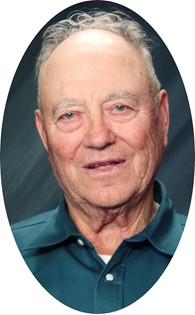 Guestbook 11
Ray Blumenshine died on Friday, June 10, 2016, at Help for Health Hospice in Riverton. He was 87 years old.

Funeral Services for Ray Blumenshine are at 10:00 am on Saturday, June 18, 2016, at the Davis Funeral Home, with Pastor Echo Klaproth officiating. Inurnment follows at Mountain View Cemetery in Riverton.

Raymond Charles Blumenshine was born August 31, 1928, In Detroit, Michigan to Henry and Katherine Walters Blumenshine. He was the youngest of seven children.

He attended school in Riverton and while in high school played football.

Ray made his living doing something that he loved – farming. When he first started farming he worked in the oil fields and hauled beets for Holly Sugar Company during the late fall and winter. He was still actively farming until November of 2015. His farming practices brought him several honors over the years. He was Outstanding Young Farmer in 1961; Ag Man of the Year in 1984; and Outstanding Barley Grower for Coors Brewing Company in 1984. He was also an Honorary Member of the Riverton FFA Chapter.

Although farming was his life, Ray found time to be a very active member of the community. He was President of the Riverton Riding Club. His work as a volunteer fireman for 8 years led him to become a Fire Commissioner for Fremont County for several years. He was a member of and held offices in the Riverton Junior Chamber of Commerce whose name was later shortened to the Jaycees. There he helped with soap box derbies and was Chairman of the Fair Rodeo for several years. Ray was on the Board of Directors for Riverton State Bank and was a Water Commissioner and President of the LeClair Irrigation District for 40 years. Ray was an active 50 year member of the Lions Club and recently received the Melvin Jones Lifetime Achievement Award recognizing his contributions to the club and the community. He was a Lifetime Member of the Elks and also President of the Wyoming Hay Producers.

Ray was preceded in death by his parents, Henry and Katherine Blumenshine; brothers, Dan, Walter and Reuben; and sisters, Helen Phelps and Dorothy McLaughlin.

In lieu of flowers please make donations to Help for Health Hospice at 716 College View Drive, Riverton, Wyoming 82501 or a recipient of the donor’s choice.