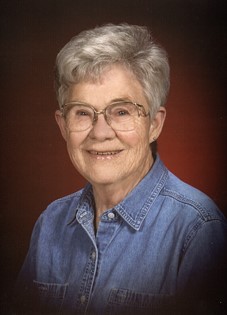 Louise Ellen McCoy was born on May 29, 1931 in Torrington, WY to Lawrence Edward and Mary Katherine (Nolan) McCoy. When she was three years old she moved with her family to homestead in Paradise Valley. She attended Shoshoni schools and graduated with the class of 1949 from Shoshoni High School. She went on to the University of Wyoming where she earned her Bachelor’s Degree in Education.

On December 27, 1954 she married Donald William Oberlie at St. Margaret’s Catholic Church in Riverton, WY. They raised their six children in Paradise Valley and the Pavillion area. They were married 19 years before Donald passed away. She raised their children as a single mother while working full time.

She taught for over 23 years at Wind River High School in Pavillion. After retirement from the school district, she went to work at Head Start for five years before officially retiring.

She was a member of the R.C.C.W., Quilt Guild, and Helping Hands Club of Paradise Valley.

She enjoyed quilting, sewing, gardening and raising her family.

Memorials may be made to St. Margaret’s Catholic Church in care of Davis Funeral Home, 2203 West Main Street, Riverton, WY 82501.