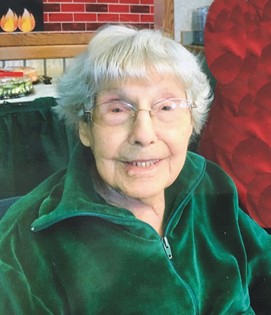 Guestbook 3
Amelia Stream, 97, of Riverton, died on Wednesday, July 6, 2016, at the Help for Health Hospice Home. A viewing will be held on Sunday, July 10, 2016, from 6:00 pm to 7:00 pm followed by the rosary being recited at Davis Funeral Home.Funeral services will be held at 10:00 a.m. Monday, July 11th at St Margaret's Catholic Church. Private family internment will be in San Jose, CA.

Amelia Mary Balis was born on July 11, 1918 in Chicago, IL to Casmir and Anna Balis. She was raised in the Chicago area and graduated high school there. She and her two sisters and two brothers were the first American generation of the Balis family. She was very patriotic and was so proud of her Polish heritage.

She was baptized into the Catholic faith and was a faithful member of St. Margaret’s Church as she was in all the churches she attended.

On October 25, 1941 in Chicago, IL she married Leo Stream. They celebrated 53 years of marriage before Leo passed on May 24, 1995. They had three children together. In 1960 the family moved to San Jose, CA where they lived until 1983 when they moved to Yuba City, CA. She moved with her daughter to Riverton, WY in 2002.

She was a homemaker most of her life, raising her children, being there for her family at every turn. She was a loving mother, grandmother, great grandmother who always put family first. Amelia loved to have close and extended family together at holiday celebrations. She was loved by all who knew her in every community which she lived. She always saw the best in people and easily overlooked their faults. She would only say good things about anybody and everybody.

She enjoyed doing crossword puzzles and watching Lawrence Welk. She enjoyed visiting her many friends in Riverton.

Memorials may be made to St. Margaret’s Catholic School or Help for Health in care of Davis Funeral Home, 2203 West Main Street, Riverton, WY 82501.