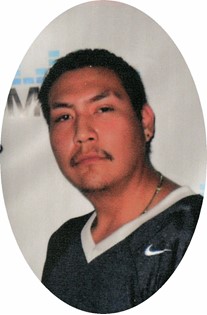 Guestbook 3
Funeral services for Freeman James “Junior” Blackburn, Jr., 28, will be held 10:00 a.m., Wednesday, August 3, 2016 at St. Stephens Catholic Church with Father Jim Heiser officiating. Interment will follow at the Arapaho Catholic Cemetery. A Rosary will be recited 8:00 p.m., Tuesday, Aug 2nd at the family home, 1523 Elmwood Dr., with a wake to follow.

Mr. Blackburn died on July 29, 2016 at the Wyoming Medical Center in Casper, Wyoming.

He worked with his brother for Gray Wolf Drilling and also worked for the Shoshone Rose Casino and most recently the Wind River Casino.

His family said that Junior had a passion for and loved to cook. He was a very artistic man who had a talent for drawing and writing. His hobbies included playing video games with his nephews and nieces and fishing, listening to music, basketball, volleyball, horseshoes, going to the movies with his family. Most importantly, Junior loved spending time with his kids and was a loving father. Mr. Blackburn was also involved with Northern Arapaho Traditional Ceremonies.