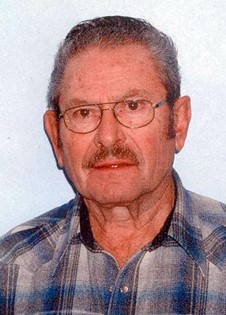 Guestbook 2
Memorial services for James E. Beyer of Dubois will be held at 10:00 a.m. on Friday, April 18, 2008 at the Headwaters Center in Dubois, with Pastor Frank Coniglio officiating. Inurnment of cremated remains will follow the service at the Dubois Cemetery.

James Edward Beyer was born May 7, 1924 in Manawa, Wis., the son of Louis J. Beyer and Eleanor (Zimmerman) Beyer. He grew up in Wisconsin.

On September 7, 1942 he married Betty J. Howard in Poi Sippi, Wis. They were later divorced, but remained lifelong friends.

Mr. Beyer held the distinction of being the youngest person in Wisconsin to be licensed as a cheese maker, working at that job for 2 years. Mr. Beyer farmed in Stoney Creek, Wis. for 1 year, then moved to Manawa where he worked for the Manawa Co-op for 2 years. He then purchased an interest in Nelsons Hardware, where he worked for 5 years, followed by purchasing a tavern called Jim’s Corners in Weyauwega, Wis. In the early 1970’s he moved to Kelly, Wyo., then to Dubois, where he bought the Branding Iron Motel. Following the sale of the motel, he worked various jobs in Dubois with Roscoe Merry.

The family said he lived for camping, fishing and hunting, enjoyed woodworking, especially building birdhouses, made knives and lamps and was a “Jack of all trades”.

Among his survivors are his former wife and companion Betty Thompson of Dubois; son C. J. Beyer and his wife Yvonne of Mt. Vernon, Ind.; half-sister Nancy Heine of Marion, Wis.; 3 gandchildren.

Mr. Beyer was preceded in death by his parents and his second wife, Deann (Parkinson) Beyer.

Memorials may be made to Mt. Calvary Lutheran Church or a charity of the donor’s choice, c/o Davis Funeral Home, 2203 W. Main, Riverton, WY 82501.