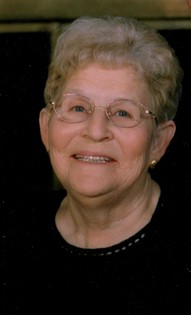 Guestbook 4
The Lord took Evelyn Pauline (McNeal) Johnson into heaven to heal her, August 5, 2016 in Casper, Wyoming, with family by her side. She was 83. She had bravely fought a fierce battle against diabetes and artery disease for several years.

Evelyn was born January 17, 1933 to William Harold McNeal and Marjorie Pauline (Holmes) McNeal in Windom, Minnesota. She was the fourth of seven children.

Evelyn was raised in Windom, graduating from Windom High School. She married her high school sweetheart, Myron Johnson on December 31, 1950. Together they had 5 children. Evelyn was a life long member of the United Methodist Church, and enjoyed singing in the choir while living in Windom.

In 1965 the family moved to Riverton Wyoming. Evelyn became the office manager at Cretex Companies while Myron was the Plant Superintendent. They had worked together for thirty years when Evelyn retired.

Evelyn and her family grew to love Wyoming. She and her husband found a love for the Union Pass area, where they built a cabin for all the family, and many extended family members, to gather together and enjoy. They spent many years there riding four-wheelers, looking at all the wild flowers, star gazing, and sitting around the fire. The memories her children and grandchildren will always hold dear are the love and devotion Evelyn had for her family.

She and her husband were devoted NBA fans, watching all the games especially the Jazz. She also never missed a Denver Bronco football game. Evelyn was an avid reader, always looking for new books to collect. In recent years, she enjoyed sitting outside on the deck watching the clouds form and jet trails go by, with her beloved dogs by her side.

Evelyn’s husband expressed Evelyn was a sweet and loving woman, and they shared a closeness few can imagine.