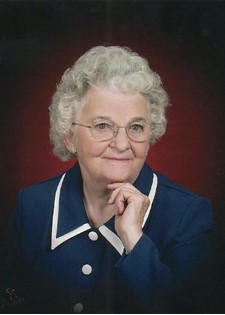 Lila was born on December 8, 1928 in Lecompton, Kansas, in the family farm house at Big Springs, Kansas. She was the only daughter of Fred and Leona (Kraft) Hartman.

Lila graduated from Lecompton High School as the class valedictorian. She continued her education at Stormont School of Nursing graduating in 1949 in Topeka, Kansas.

Lila married James Bonnel in Stull, Kansas on August 17, 1952. They lived in St. Francis, Kansas; Havre, Montana; and Greybull, Wyoming before settling in Riverton in 1961 to raise their family near Wyoming’s hunting and fishing opportunities.

They had seven children Buck, Cynthia, Candace, Linda, Penny, Tim, and Kristi. Lila loved dogs and always had several. A sixth-generation farmer, Lila was an original organic gardener, raising chickens, cows and horses. She always had a huge garden and many neighbors and friends enjoyed the produce and flowers from her garden. She enjoyed feeding people and was an excellent cook. A talented seamstress, Lila sewed clothes for all her children including wedding gowns.

Aside from raising her children, Lila was a well-known nurse in Riverton. She worked at Wind River Health Care and Rehabilitation Center. At the Manor, Lila went above and beyond to ensure the comfort and care for her patients. After 17 years, at the age of 68, Lila retired from nursing.

The family would like to acknowledge the very cherished love, friendship and support of Alice, Guy and Lacey Reynolds. Their extreme generosity greatly enhanced Lila’s life for 25 years and especially during her final days.

She was preceded in death by her husband Jim, her parents Fred and Leona, her son Buck, her brothers Leland and Warren, son-in-laws Fred Novotny and John Russell and numerous dogs.

Memorials may be sent to the Riverton Animal Shelter or Riverton Senior Center.