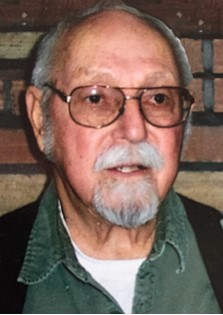 Harold Lloyd Miller was born on March 22, 1930 in Paxton, NE to Peter and Katherine (Kehm) Miller. His parents emigrated from Russia. He and his eleven siblings were the first generation in the United States. He and his siblings grew up in Lexington, NE. He was the last surviving of the twelve children.

He was a baptized in Lexington, Nebraska at the Presbyterian Church.

He lost two of his older brothers in WWII and felt it an honor to serve his country. On July 31, 1947 he enlisted in the U.S. Air Force and served during the Korean War. He was honorably discharged on July 20, 1953.

After being discharged he moved to Pavillion, WY to work on his sister’s farm. Shortly thereafter he met Genie Wintermote. In 1955 they were married in Pavillion at the Methodist Church. They lived in Riverton the majority of their married life and together they had two sons and one daughter. They were married for 61 years before his passing.

He was very knowledgeable in the construction trade and started working for Pete Barton in 1956. He helped build the current Riverton High School and retired after it was completed. Not one to sit around he then became the head custodian at the high school until 1995 when he retired again. Retirement only lasted six months before he went to work at the swimming pool at the high school for thirteen years retiring for the final time.

His family said was an avid reader, enjoyed crossword puzzles, watching NFL football, and was competitive gardener being generous with his harvest. He loved to play cards and eat popcorn with his family and grandchildren. He also taught them how to drive.

He was a lifelong member of the V.F. W. and volunteered at the library. He enjoyed interacting with people.

He is survived by his wife, Genie; sons, Gerald Miller and his wife, Debbie, of Riverton and Steven Miller of Laramie, WY; daughter, Shane Jepson and her husband, Brent, of Powell; brothers-in-law, Varnard Wintermote of Casper and Gene Wintermote of Shoshoni; grandchildren, Jacob, Holly, Zachary, Colin, and Morgan; great grandchildren, Kaitlyn, Madison, Allisen, Elliana, Camryn and, Charlytt; and numerous nieces and nephews.

He was preceded in death by his parents, Peter and Katherine Miller; and eight brothers and three sisters.

Memorials may be made to Make-A-Wish in care of Davis Funeral Home, 2203 West Main Street, Riverton, WY 82501.