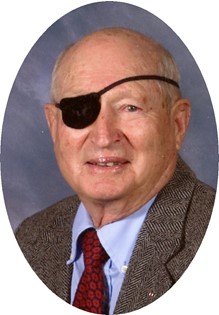 Guestbook 3
Thomas “Tom” Bell, 92, of Lander, died on Tuesday, August 30, 2016, at his home. A memorial service will be held 10:00 am, Tuesday, September 6, 2016, at the Museum of the American West in Lander. Inurnment will follow at Mount Hope Cemetery with full military honors.

Thomas Alton Bell was born April 12, 1924 to Lafe and Hilda Bell in the small coal mining town of Winton, Wyoming just north of Rock Springs. He was raised on a small farm northwest of Lander on the North Fork of the Popo Agie River during the Great Depression, where he learned very early the values that guided his life. He graduated from Fremont County Vocational High School in 1941 and spent time in Alaska and at the University of Wyoming before volunteering for service in the U. S. Army Air Force in World War II where he was a bombardier on B-24 bombers. In 1944 on a bombing run over Austria he was hit by flak and was severely wounded, losing his right eye, but was able to complete the bomb drop and for his gallantry was awarded the Silver Star, the Air Medal with three clusters, and the Purple Heart. Post war, Tom attended the University of Wyoming where he met his future bride, Muriel "Tommie" Wilcox. He earned his bachelor's degree in wildlife conservation and game management in 1948 and a Master's Degree in Zoology/Ecology in 1957. He was honored as an outstanding alumnus of the UW Arts and Sciences College in 2003 and in 2016 was awarded a UW Honorary Doctorate Degree, honors causa, given to recognize a lifetime of outstanding accomplishments in service to the State of Wyoming and to the nation.

Tom and Tommie married in 1947 and had three boys, Alan, David and Jim. They later adopted three more children, Vic, Rachel and Christine. Tommie supported Tom in his life and endeavors, more than many know, or appreciate.

Tom worked for the Wyoming Game and Fish Department for a number of years, mainly as a fisheries biologist in various locations around the state, and also taught science in Lander schools.

In 1967 Tom founded the Wyoming Outdoor Council, the oldest and largest statewide independent conservation organization in Wyoming. WOC's mission since inception has been to protect Wyoming's environment and quality of life for future generations. Tom also established High Country News in 1970 with the goal of providing information that he felt was critical to informing the public about natural resource and public land issues throughout the American West. Almost a half century later, these two organizations are still actively engaged in accomplishing their missions as originally envisioned by Tom.

He was honored repeatedly for his dedication and passionate work in the conservation field, including the Shikar-Safari Club International Award, Wyoming Conservationist of the Year (1970); the U.S. Department of the Interior Conservation Award (1974); the Daughters of the American Revolution National Conservation Award (1995); the National Wildlife Federation Award for Conservationist of the Year (2002); and the Greater Yellowstone Coalition Sargent Award, (2007). In addition, in 2000 he was selected as one of 100 distinguished citizens of Wyoming in the 20th Century and in 2006 was inducted into the Wyoming Outdoor Hall of Fame.

Tom was also involved with writing for and publishing the Wind River Mountaineer, a magazine involving Fremont County history. Additionally, he worked for the Fremont County Museum system and was involved with the establishment of the Museum of the American West, located in Lander.

Tom was preceded in death by Tommie, his faithful and loving wife, his parents, his sister Lois and his brother Bud. He is survived by his children, twenty grandchildren, numerous great grandchildren, and ten nieces and nephews.

"I never hoped for my kids to be millionaires, but I hoped they would breath clean air, drink clean water and experience a state wild enough to,foster freedom"-Tom Bell.

Memorials may be made to the Museum of the American West, the Wyoming Outdoor Council, and High Country News in care of Davis Funeral Home, 2203 West Main Street, Riverton, WY 82501.