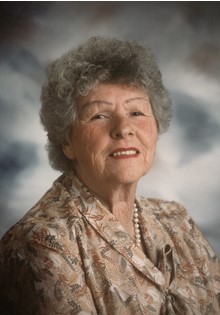 Guestbook 0
Funeral services for Barbara A. "Toots" Roice of Riverton will be at 2 p.m. Thursday, April 17, at the Davis Funeral Home of Riverton. Pastor Aaron Justice will officiate. Interment will follow at Mountain View Cemetery in Riverton. There will be a viewing from 7:30-8:30 p.m., Wednesday, April 16, at the funeral home and from noon to 1:30 p.m. prior to the service on Thursday. Mrs. Roice died at her home in Riverton Monday morning, April 14, 2008, at the age of 80. Barbara Alice Raught was born on March 26, 1928, in Capulin, N.M., the daughter of Joseph and Grace Leota (Munden) Raught. She attended school in Elizabethtown, N.M., where she grew up. On Dec. 4, 1943, she married Carl Albert "Bud" Roice in Las Vegas, Nev. Mrs. Roice had lived in Riverton since 1978, coming here from Jackson where she had lived for 25 years. She had worked a variety of jobs over her life. Her family said Mrs. Roice enjoyed playing darts, rock hunting, fishing, and gardening. She was a member of the B.P.O.Does Local 49 in Jackson and the Eagles Lodge Auxiliary 3036 in Riverton. Survivors include children, Leona "Nonie" Roice of Riverton, Donna Ray Teeples of Rock Springs, Carl Roice of Riverton, Myron A. Roice and Byron K. Roice, both of Rock Springs, and Grace M. Roice of Pocatello, Idaho; 11 grandchildren and 25 great grandchildren; a sister, Mae Alvis of Raton, N.M.; numerous nieces and nephews. She was preceded in death by her husband, Carl A. Roice; her parents, Joseph and Grace Raught; three brothers, Norman, Wayne, and Jasper Raught; three sisters, Ellen Daniel, Audrey Youch, and Arlene Rountree; one daughter-in-law, Janett Roice. Memorials may be made to the MIA/POW Awareness Rally Corp., in care of the Davis Funeral Home, 2203 West Main, Riverton WY 82501. On-line obituaries are available and condolences for the family may be made at: thedavisfuneralhome.com Services are under the direction of the Davis Funeral Home of Riverton.