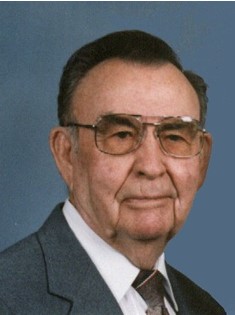 Guestbook 0
Funeral services for Herman Busch will be at 11 a.m. Tuesday, April 22, at the Trinity Lutheran Church in Riverton. Pastors Vernon Boehlke and Paul Bundschuh will officiate.

Interment will be at Mountain View Cemetery in Riverton.

Herman Busch was born on Oct. 11, 1918, in Scottsbluff, Neb, to Peter and Anna (Herman) Busch. He attended school in Scottsbluff and served with the U.S. Army from 1940 to 1945, including two years in the Aleutian Islands.

Mr. Busch served as a director on the Beet Growers Board for 12 years, was chairman of the Farm Home Administration board at both the local and state levels, served on the Fremont County Co-Op board, and was an A.S.C.S. committeeman for several years.

Mr. Busch had been a member of the Trinity Lutheran Church in Riverton since 1946 and held a life-time membership of the Riverton Post of the Veterans of Foreign Wars.

His family said Mr. Busch was an avid reader who enjoyed Western history, fishing, doing puzzles, and enjoyed working outdoors. They said he especially enjoyed being with his grandchildren and great grandchildren.

He was preceded in death by his parents; daughter, Anita; grandson, Justin, three brothers, and two sisters.

Memorials may be made to Trinity Lutheran School or Church, or a charity of the donor's choice in care of the Davis Funeral Home, 2203 West Main, Riverton, WY 82501.