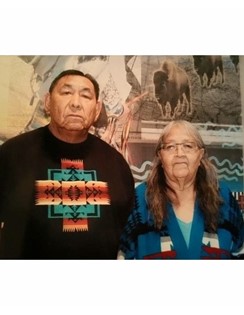 Lyle T. and Sarah A. Black

Guestbook 16
Lyle T. Black Sr. and Sarah A. Black, husband and wife both 70 and lifelong residents of the Wind River Reservation, died on Saturday, November 26, 2016. A rosary will be recited for both at 7:00 pm on Thursday, December 1, 2016, at Great Plains Hall followed by the wake at 192 Left Hand Ditch Road. The funeral services will be at 10:00 on Friday, December 2, 2016, at Great Plains Hall. The burials will follow at the Arapaho Catholic Cemetery at St. Stephen’s.

Lyle Thomas Black, Sr. was born on August 25, 1946 in Fort Washakie, WY to Henry and Katie (Brown) Black. He was given his Indian name of Bee3ei Hucucii, meaning “Little Owl”. He attended schools in Arapahoe and graduated from Riverton High School. After graduation he joined the U.S, Army where he served during the Vietnam War. He was honorably discharged in 1969. He lived in Casper for approximately four years attending a trade school.

Lyle was a member of the Arapaho Legion Post 84.

Sarah Ann Spoonhunter was born on August 29, 1946 in Arapahoe, WY to Ward and Margaret (Gambler) Spoonhunter. She was given her Indian name of Hisei Bee’ei, meaning “Red Woman”.She attended schools in Arapahoe and graduated from the Chilocco Indian Agriculture Boarding School in Chilocco, OK.

Lyle enjoyed working in his garden. He loved the Sundance, setting up the camp every year and participating many times.

Lyle and Sarah were married on October 27, 1972 in Thermopolis, WY. Together they liked going to the casino and traveling to many different places.