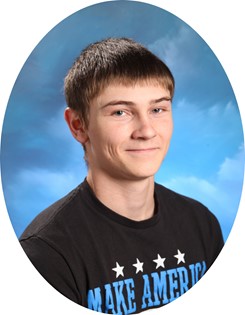 Guestbook 10
On December 5, 2016, James C. Myers III, 16 went to be with the Lord where his soul was placed higher than the angels in Heaven. He passed away at the Primary Children’s Hospital in Salt Lake City, UT. A viewing will be held on Saturday, December 10, 2016, at the Calvary Baptist Church starting at 1:00 pm with the funeral service starting 2:00 pm.

James Clair Myers III was born on June 29, 2000 in Erie County, PA to James Clair Myers, Jr. and Amanda Sue (Dana) Myers. He moved to Riverton, WY at an early age. He was a Junior at Riverton High School.

He was baptized into the Baptist faith.

James had a charisma about him that was so wonderful. He participated in speech and debate and drama. His family said he was a very good chess player, loved to play video games, enjoyed weight training in school where he did his daily pull ups, and collected knives. He loved cars and had a 65 Chevy Impala SS that he was planning on rebuilding with his father. He promoted Trump with a great enthusiasm that left us all easily aware of his support.

He is survived by his cat, Austin; mother, Amanda Myers of Riverton; father, James Myers, Jr. of Pavillion, grandparents, Sue and Pastor Richard Morgan and Jim and Delana Myers; brothers, Alex Myers of Warren, OH and Gary Gariepy of Riverton; and his sister, Allie Gariepy of Greybull, WY.

Memorials may be made to the Myers Family in care of Davis Funeral Home, 2203 West Main Street, Riverton, WY 82501.