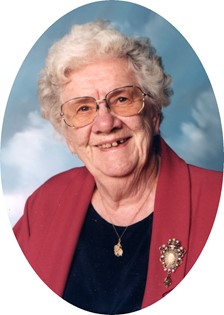 Guestbook 3
Stella Goertz, 100, of Riverton, died on Wednesday, December 07, 2016, at Wind River Health Care and Rehabilitation in Riverton. A funeral service will be held at 10:00 am on Monday, December 12, 2016, at Davis Funeral Home with Pastor Dale Adams officiating. Burial will follow at Mountain View Cemetery. A Viewing will be held Monday, 9:00 a.m. until service time.

Stella Marie Reimer was born on February 15, 1916 in Chinook, MT to Jacob and Elizabeth (Weibe) Reimer. She moved to Hulett, WY as a young child and attended school there graduating from Hulett High School. She then attended Black Hills College where she received her teaching certificate.

She was a member of the Nazarene Church of Riverton.

After receiving her teaching certificate she taught in a one room school house in Mona, Wyoming. Which was a small town that was located about 15 miles from Aladdin, Wyoming.

While teaching she met her husband, Gilbert Goertz. They were married on May 5, 1939 in Belle Fourche, SD. They remained in the Mona area where their only child was born. In 1961 they moved to Riverton, WY.

After moving to Riverton she worked at the American Legion as a cooks helper, a baker at the bakery of Ben’s Super Market, and was a house mother at the Wyoming State Training School. She volunteered her time as a Foster Grandparent at Jefferson Grade School where she read to children. She enjoyed helping students learn and achieve their highest potential.

She enjoyed oil painting, ceramic painting, loved to sew and traveled all of the United States including Alaska.

She was preceded in death by her husband of 44 years, Gilbert Goertz; parents, Jacob and Elizabeth Reimer; brothers, Alven and Henry; and sisters, Anne, Ida, and Zelma. Memorials may be made to donor’s choice in care of Davis Funeral Home, 2203 West Main Street, Riverton, WY 82501.