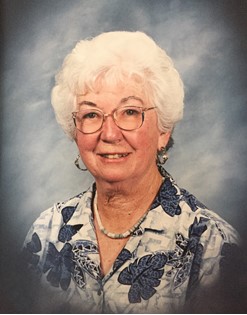 Clydene Robb Allen was born October 10, 1924, to Clyde Willis Robb and Vesta Beatrice Warden Robb, in Grant City, Missouri. Clydene had an older sister, O'Rita Maxine, and a younger brother, Alan. They grew up on a small farm, during the depression. Clydene graduated from Grant City High School in 1942. Through High School, she raised turkeys to pay for her college education.

Clydene graduated from Northwest Missouri State Teacher’s College in Maryville, Missouri, in 1943, with an elementary education teaching certificate. She then followed her heart to Wyoming.

In Lander, she met Townsend Crosby “T.C.” Allen. They were married Easter Sunday, March 25, 1951. Together they owned and operated the 4U Motel. She and T.C. were the proud parents of seven children.

Clydene pursued her love for teaching by spending the next 35 years wrangling Lander children through the 3rd and 4th grades. After retirement, she enjoyed the impromptu visits of her former students.

Geography being her favorite subject, she and T.C. enjoyed traveling during summers and retirement. They enjoyed several winters in Tucson, AZ. They often would take grandchildren to Good Sam Jamborees.

Clydene was a member of P.E.O., Eastern Star, Oriental Band, United Methodist Church, Women’s Circle, Fremont County Historical Society, the Friends of South Pass, the Snodrifters, and Fremont County Pioneer Association. At a recent Pioneer Association picnic, she was presented with a plaque recognizing her as the “Oldest Living Pioneer Woman”, for which she was very tickled. Clydene was a very generous person, and was always baking a pie or cookies to donate to a fundraiser for one of the organizations she loved, such as helping with the South Pass Gold Rush Days.

In addition to her family and many good friends, Clydene enjoyed surprises, a good laugh, entertaining, and socializing.