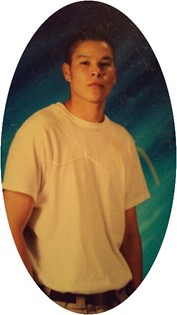 Guestbook 9
Adrian K. C’Bearing, 38, of Arapahoe, died on Friday, December 16, 2016, at his home. A rosary and wake will be held at 7:00 pm on Tuesday, December 20, 2016, at Great Plains Hall in Arapahoe. The funeral service will be at 10:00 am on Wednesday, December 21, 2016, at St. Stephens Catholic Church with burial to follow at the Arapaho Catholic Cemetery. Adrian Kane C’Bearing was born in Riverton Wyoming on June 18th 1978 to Melvina Whiteman and Ray Underwood. He was adopted and raised by Felicia Whiteman and Daniel C’Bearing Sr. Adrian also took Jenny Brown as a mother.

He attended elementary school at Arapaho School and St. Stephens and graduated from St. Stephens High School. Following high school he started working on the rigs on the pulling unit rig and then drilling rigs after.

He enjoyed drawing, fishing, hunting, and spending time with friends and family and his dog Kota. He enjoyed his job of being a floor hand, motor hand, and a derreck hand on the oil rigs and meeting and making new friends while on the rigs.