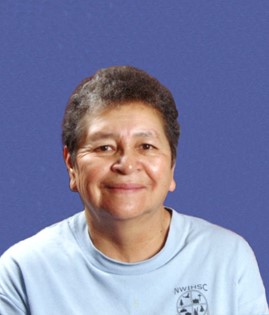 Amelia Marie Goggles was born on May 25, 1945 in Riverton, WY to Michael Goggles Jr. and Genevieve (Duran) Whiteplume. She grew up in the Arapahoe and Hamilton dome area as well as Riverton, WY.

She was baptized into the Catholic faith and attended St. Stephen’s Catholic Church faithfully.

She married Odell Shakespeare on May 22, 1985 in Lander, WY. They made their home in Riverton, then Arapahoe.

She worked as a cook for the Arapahoe Headstart Program for over 18 years.

Amelia enjoyed dancing at pow-wows with her grandchildren and was known for her contagious laughter.

She was preceded in death by her parents, Michael Goggles, Jr. and Genevieve Whiteplume; and her grandparents, Joe and Mary Duran.