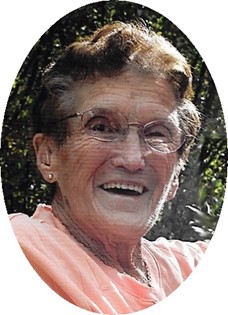 Ethel F. Durrington was born August 16, 1932 in Buffalo, MO to Clint and Helen (True) Durrington. She and her two brothers and one sister grew up in Buffalo. They attended school in Buffalo and Urbana, MO.

She was a member of the United Methodist Church of Pavillion.

While working on the farm full time she also worked as a U.S. Mail Carrier, weighed sugar beets, and also worked at Valley Motor Supply.

On November 10, 1948 she married Lee Oral White in Buffalo, MO. They moved to Riverton, Wyoming where they farmed hay and grain while raising sheep. They were the proud parents of three children, Jim, Ralph and Genelle. They were married for 43 years before Oral passed away on March 11, 1992. She moved to Casper in 1998.

She belonged to the OAO Club (Our Afternoon Off), enjoyed playing cards, baking, cooking, going to the casino, and basketball, especially the Casper College Thunderbirds. She never missed a sporting event of her children or grandchildren and cheered them on no matter what.