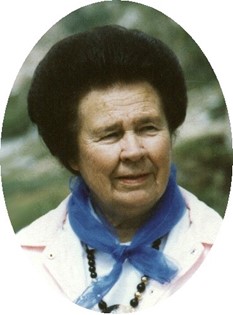 Guestbook 1
Ilo C. (Petersen) Davis of Riverton died at Wind River Health Care on Thursday morning, May 22, 2008. She was 94 years old. Cremation will take place and memorial services will be scheduled at a later date. Ilo Claire Edson was born in Mason City, NE on January 9, 1914, the daughter of Warren Edson and Lennie Agnes (Hager) Edson. She grew up and went to school there and was a graduate of Mason City High School.

She married Elmer Petersen and they moved from Nebraska with their two sons Larry and Erroll, purchasing their home on West Sunset in 1939.

Mrs. Davis was the first clerk at the sale barn when it was owned by Marion and Dorothy Petsch, and, with her husband Elmer, owned and operated the Texaco Bulk Plant. The couple also ran dairy cows for many years, although her favorite breed of cattle was Charolais.

The family, including Elmer, Ilo, Larry and Erroll, had a dance band called “The Danconians”, and frequently played for dances across the county.

In 1969 she married Edgar V. Davis in Riverton.

Over the years, she participated in the Fremont County Fair, entering her many flowers in the competition. The family said she was an avid duplicate bridge player, taking part in many tournaments all over the state.