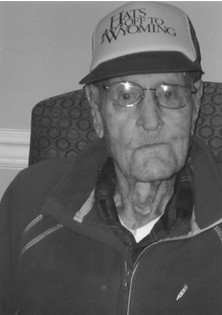 Cremation has taken place and inurnment will be at 3:30pm on Friday, May 26, 2017, at Mountain View Cemetery in Riverton, WY.

Keith LaVerne Lovell was born in Gering, Nebraska on July 1, 1921. He was the son of Nellie Williams Lovell and Clarence Eugene “Judd” Lovell. He graduated from Gering High School in 1939. He entered the Nebraska National Guard in 1938 and was activated for World War II in 1940. He served proudly in the European Theater of Operations including battles for Normandy, Northern France, Rhineland, Ardennes and Central Europe.

He was honorably discharged in 1945 and moved to Riverton, Wyoming in 1949 at the behest of a relative. He worked as a bartender at the old LaPere Hotel in downtown Riverton and then for Pacific Power and Light. He met his future wife, Evelyn and they were married on May 27, 1951.

Keith was instrumental in bring power to South Pass and Atlantic City and retired in 1983. After retirement, Keith became an avid gardener. No self respecting dandelion would invade his turf. He loved his car trips and would drive his wife to her various conferences, family reunions, and visitations.

Survivors include his daughter, Susan; two grandchildren, Barbara and Brent; sister-in-law Frances Lovell of Gering and numerous nieces and nephews.

He was preceded in death by his wife, Evelyn; his parents, Nellie and Judd; brothers, Gordon, Bill, and Doug, and sister, Alice.

On-line condolences may be made to the family at www.TheDavisFuneralHome.com. Services under the direction of Vase Funeral Home and Davis Funeral Home.